Back To Basics by Ken McBroom
article copyright

I decided years ago that the bow and arrow would be my weapon of choice and believe me I get some funny looks when I pull a bow out of the truck during gun season but I’m alright with that. I began bow hunting when I was fourteen. It was a Browning Nomad along with a leather quiver of cedar arrows with the famous Bear broad heads glued to the tips. That bow was a gift from my dad and has just resurfaced from storage and will soon see action once again as I plan to up the challenge even more by using more primitive equipment in my search for Whitetail. Some say that is a little on the weird side of things given the high tech. options that are available, my Dad leads the way with that notion even though he used the same bow before I was born. He says he had to use the recurve because it was his only choice. He now can’t believe that I want to use it again.

It was while hunting with this bow that I had two of my most memorable hunts. Each ended with a clean miss but each one more vivid and remembered more often than any of my higher tech. hunts, even those that resulted in a kill. Why? I’m not sure, but I tend to believe that it has something to do with the fact that everything was simple and the focus was on hunting and not arrow speed or whether or not I left my release in the truck. One of those hunts was a doe that caught me asleep. I heard her and opened my eyes to find her walking straight for me. I was sitting in what we call a hog blind, brush strategically placed around the hunter to conceal him or her. In other words long before I used a tree stand. I can see her now in my head coming straight for me on a trail I located that morning coming up the mountain from the fields below. She got within ten yards of my hog blind before her walking woke me. I had an arrow ready but clicked it on the riser in my haste to take a shot before she walked over me. She heard the click and jumped around and went about fifteen yards to my left. Perfect! I missed and the cedar arrow found one of its cousins and the old Bear Broad head is still in that cedar tree atop a well-traveled ridge in Tennessee.

The one hunt that stands out more than any other was a stare down between me, an adolescent, and a six point buck, yet another adolescent trying to make his way in this crazy world. I was hunting on a piece of property that was thick with deer. I am grateful for that piece of land, maybe two hundred acres, where I wandered and learned so much about hunting and life. What I would give for a nice piece of land again to hunt where the deer, for the most part, go unmolested and tend to go about their business in a normal manner. Anyway that’s another story in and of itself. 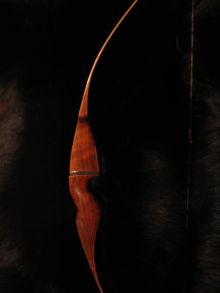 That morning I slipped into my thick brown Walls insulated coveralls and left the house before daylight to walk the half mile behind the house to a ridge where I had seen a lot of rubs. I slipped slowly down an old fencerow that skirted the entire perimeter of the property. Arrow nocked, eyes peeled, I was stopped in my tracks by a small six point just inside the cedar thicket that I was skirting. I froze, as did the buck. I was hunched over as I was creeping along and keeping a low profile. The six point stared at me and I stared back, each waiting for the other to make a move. The deer was no more than twenty yards and I knew that I could hit a paper plate at thirty with the Browning Nomad so I stood my ground. Finally my legs began to shake and a pain was beginning to run up my back and into my shoulders.

The minutes went by and finally the buck began to feed again but I had already learned on previous hunts that deer will try to fool you into thinking they are feeding then jerk their head up and look to see if you moved or not. After several attempts to catch me moving the buck finally decided the coast was clear and began to feed normally again. By now my whole body is in pain but I manage to straighten up enough to attempt a shot. The six points never noticed me until I began the draw and he looked me straight in the eyes and by the look on his face I knew he was not long for that spot and I was hoping he was not long for this world. Well, as is the case in the real world and away from the target range my arrow failed to find its mark and the little six point bounded away unharmed with that cedar arrow also finding a distant cousin and lodging in the base of a big cedar tree.

Those two hunts have got to be two of my favorite and as the bow hunting options become more plentiful and higher tech. Those two memories creep into my head more and more often. I have been fortunate to harvest several animals in my thirty-seven years as well as several with my bow, which is an older High Country compound that I love to shoot. With age comes the desire to go back to my roots and try to relive those feelings of simple one on one confrontation with the animal without the added worries of all the high tech. gadgets that seem to clutter the mind and not only take away from your wallet but also from the experience.

I have to admit that I have yet to convert to the old recurve but let’s just say I have taken the time to dig it out of the barn and I am now in the tedious process of refinishing it. I plan to get some cedar shafts and hunt down some of my old Bear broad heads to glue to the tip. The desire to go back to the basics is slowly creeping back into my mind, an example being this article. I will keep you posted as to the hunts that transpire in the seasons to come and the experiences that follow.