I recently received an email from my wifes’ work regarding a supposed grizzly bear attack in Alaska. Where upon a 14 foot grizzly bear was shot to death by a ranger out deer hunting. It came with three photographs, 1] displaying overall size of grizzly and hunter together, 2] displaying size of paw and 3] graphic portrayal of hiker practically eaten.

forgive my morbidity on this, but can anyone verify this story, which l have pasted below:

Many regards piedipers
The following (first two) pictures are of a guy who works for the US Forest Service in Alaska and his trophy bear. He was out deer hunting last week when a large grizzly bear charged him from about 50 yards away. The guy unloaded his 7mm Mag Semi-automatic rifle into the bear and it dropped a few feet from him.

The big bear was still alive so he reloaded and shot it several
times in the head. The bear was just over one thousand six
hundred pounds. It stood 12′ 6″ high at the shoulder, 14′ to the
top of his head. It’s the largest grizzly bear ever recorded in
the world. Of course, the Alaska Fish and Wildlife Commission did
not let him keep it as a trophy, but the bear will be stuffed and
mounted, and placed on display at the Anchorage airport (to remind
tourist’s of the risks involved when in the wild).

Based on the contents of the bears stomach, the Fish and Wildlife
Commission established the bear had killed at least two humans in
the past 72 hours. His last meal was the unlucky nature buff in
the third picture below. The US Forest Service, backtracking from
where the bear had originated, found the hiker’s 38-caliber pistol
emptied.

Not far from the pistol was the remains of the hiker. Although the
hiker fired six shots and managed to hit the grizzly with four
shots (they ultimately found four 38 caliber slugs along with
twelve 7mm slugs inside the bear’s dead body) it only wounded the
bear – and probably angered it. The other body has not been
found. The bear killed the hiker an estimated two days prior to
the bear’s own death by the gun of the Forest Service worker.

Think about this – If you are an average size man; You would be
level with the bear’s belly button when he stood upright, the bear
would look you in the eye when it walked on all fours! To give
additional perspective, consider that this particular bear,
standing on its hind legs, could walk up to an average single
story house and look over the roof, or walk up to a two story
house and look in the bedroom windows.

Fitter
I’ll dig up the info for you but the story has been quite twisted as its been around for quite some time.

MamaEagle
I remember that one too. I think there was a little truth and a little tale to that one.

Here are some info and photos but as I mentioned take it for what its worth. 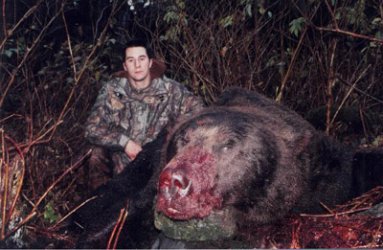 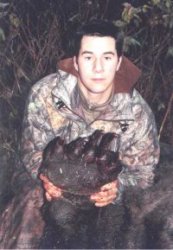 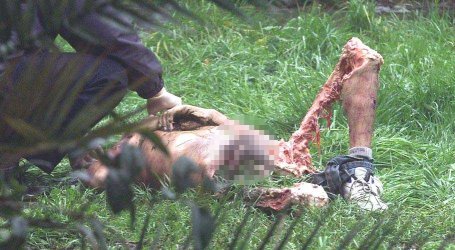 The first two photos are legitimate images of a giant grizzly brought down by a hunter in Alaska. However, the accompanying story is about another hunter and another bear.

On October 14, 2001, U.S. Air Force Airman Theodore Winnen was deer-hunting on Hinchinbrook Island, Prince William Sound when he and his hunting buddy, Staff Sgt. James Urban. spotted the bear. Effectively cloaked by their camouflage hunting gear, the pair had plenty of time to take their shot. The first bullet from Winnen’s 338 Winchester pierced the brain, but it took five more in the chest to bring him down. The first two photos above were taken by Urban and were posted on several hunting boards and shared among hunting enthusiasts. The bear was 10 1/2 feet long and weighed more than half a ton – Big, but not a record.

Six months later, Sigfredo Casiano, was hiking in Alaska and had a similar experience with a large bear. Casiano claims he found himself about 10 feet from the animal when the beast started moving toward him. His first shot brought the bear down, but he fired several more shots, probably to make sure. In this case, the bear was a brown bear, not a grizzly, and between eight and nine feet tall.

Because of the temporal closeness of these two accounts, the two stories became confused. Eventually, the picture of Winnen became associated with the story of Casiano. The confusion was frustrated by National Forest Service officials who mistakenly identified the photos to be from Casiano’s story.

If that weren’t bad enough, some joker along the line decided to embellish the story with a gruesome prologue, complete with photographic evidence. While the origins of the third picture remain unknown, we do know that it has nothing to do with either Winnen’s or Casiano’s bear encounters. It was added nearly a year after the most popular version of this story began circulating. In fact, there is no evidence in either case that the bears had ever attacked humans.

MamaEagle
For what it is worth, I remember that third photo was circulated on a website and that the site claimed it to be the result of a dog attack.

Thanks for this and the reply. Admittedly l have to be honest l thought that there might be a hint of truth in some portion somewhere, but thought that in another area it wasn’t quite right.

ANCHORAGE, Alaska (AP) — A man on a day hike in a rural area was killed when a bear bit his head, Alaska State Troopers said Wednesday.

Kenneth Cates, 53, was found Wednesday morning on a horse trail in a heavily wooded area of the Kenai National Wildlife Refuge near his hometown of Soldotna.

Seeing as this stated a ‘hiker’ being killed and thought, here we go this is something.

Out of curiousity, what is the record for the biggest grizzly, and how big is the actual grizzly bear in the two legit photos?

Fitter
The bear in the picture is supposedly as you mentioned: The bear was over one thousand six hundred pounds. It stood 12′ 6″ high at the shoulder, 14′ to the top of his head. It’s the largest grizzly bear ever recorded in the world.

MamaEagle
I had to go check this out at the truth or fiction site goto when wondering about some emails i recieve. This is what I found attached to this same story and pictures.

********
THE TRUTH
Thanks to our readers, the truth about these pictures has been found. The facts are a little different from the original eRumor, but the pictures do record the results of a true hunt and are real.

The original pictures lacked the label linking them with hunting-pictures, but that is where the pictures reside. They were posted by a hunter who used the nickname Dalliwacker but who is, according to published articles, Jim Urban. He says that the bear was actually ten feet high and weighed between 1,000 and 1,200 pounds. He says the bear did not stand up then drop down and charge. It showed no aggression at all. He also says the bear was not shot on Hitchenbrook Island but, like all good hunters, he won’t be specific about where he got it .*************

The version of the eRumor that claims the bear was a killer and was shot by a forest service employee are false.

Fitter
Heres an update on the Worlds Largest Bear for all who continue to follow and seek the truth behind this story.

I recently watched a special on National Geographic and a portion of the show was dedicated to this very same bear and the actual hunter. The hunter himself, pictured above, appeared on the show and offered some insight from his home. And yes, the famed bear he shot was mounted on the wall in the interview. Here are some transcipts from the show in exact format.

Narrator:
In October 2001, a hunter legally shot a bear on Hinchinbrook Island off Alaska’s southern coast. He emailed photos of himself posing with the bear to friends. The photos became an internet sensation and soon, stories appeared along with the images. Blogs and websites claimed the Hinchinbrook Island bear stood 12 1/2 feet tall on it’s hind legs. A super bear as big as any ever seen.

Ray Massey – Forest Service Spokesman Alaska Region:
If the bear sat down in a room with you, and was flat on his behind on the floor, and tipped it’s nose up, his head would be through a normal ceiling by about a foot or two. If this bear stood up, as reported in the web, it could be watching you take a shower on the second floor of your home.

Narrator:
And there was more. A photograph of gnawed human remains. According to the internet, the last man eaten by the giant bear, shot on Hinchinbrook Island. This story of a monster man-eating bear astonished web surfers around the world. Especially the hunter who shot the bear. He doesnt know how the bear he killed got to be the worlds biggest bear in cyberspace. It was big. But not that big.

Actual Hunter:
In relation to the world record he wound up only being short by 2 inches and uh 2/16ths of an inch which put him at the rank of 145 out of the 347 of the largest, worlds largest bears ever taken. Ya know I got to get that straight. He’s still a record he’s just not the world record.

Narrator:
But what about that other photo claiming to show the Hinchinbrook bears last meal?

Actual Hunter:
Thats another picture that gets associated with my bear. That has nothing to do with my bear. As far as I know this bear didnt, ya know, kill nobody or maul nobody.

Narrator:
So where did the photo come from? Bear experts took a closer look and discovered that, wherever this man died, it probably wasn’t anywhere near Alaska.

Dr. Tom Smith – Research Wildlife Biologist USGS Alaska Science Center:
If you look at the vegetation in there it’s not quite tropical but it certainly is not Alaskan. It appeared to be the victim of a tiger attack from the Indian sub-continent.

Narrator:
The super-size Hinchinbrook bear is a myth from cyberspace.