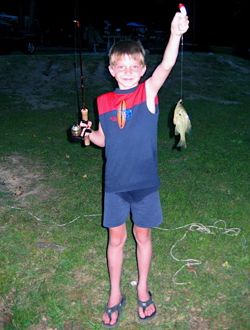 Take a close look at the image insert. Notice the cheeks red from the sun and lips stretched with a smile. Anyone observing this image can plainly see this smile wasn’t forced, like the ones on the more expensive family photos. Young Mr. Garrett Bear loves his computer games just as much as any other boy but mention a fishing trip and he is ready to go. Garrett began his fishing adventures, in the small water retention ponds scattered throughout his home town of Indianapolis. Bread dough and Bluegills was the beginning but eventually Garrett added several species, baits and techniques to his angling experiences to include one large Carp, a story he must tell, I will attempt to pursued him to write the story of the giant carp for Water and Woods someday.

We all know the attention span of a young person is short, at best, so one must prepare the young angler for success filled with action. These two ingredients, early on, equals hooked on fishing for life. It is important to nurture the beginning stages of a young persons fishing adventures in order to build their confidence and patience. Some people can throw a plastic worm or spinner bait for hours without a hint of a strike. A young person needs to feel the rewards of their actions much sooner. We who are seasoned anglers know by now that there are very large bass or catfish lurking about and we are willing to sling a big lure at the banks for hours or sit idle for massive amounts of time in the dark with a giant shad at the end of our line in anticipation of a 40 pound blue cat. Most young people either can not or will not develop the patience needed, without the proper guidance, for that type of fishing. Kids need to learn the basics first and they need to catch fish and lots of them. With time they will learn that there are other fish out there and slowly build up enough patience to pursue them.

Young Garrett learned a valuable lesson of patience from his sister, who by the way is a great angler in her own right. The two of them were fishing from the bank on Lake Barkley in Tennessee. Garrett had given up on the fishing and was proclaiming loudly the devastating news that there were absolutely no fish in Lake Barkley. I could here Garrett on all the way in remote Alaska as I was talking with his Mom on the phone. During the impatient rants and raves in the background Kayla, Garrett’s sister, was suddenly on the phone informing me that there were fish in that lake because she could see them swimming but that her fishing pole was messed up and little brother would not allow her to use his, which had been cast aside in trade for skipping rocks.

“I want you to grab your brother’s fishing pole and go down to that lake and prove to him that the fish are still there.”

Finally the phone conversation resumed. It wasn’t long however before I heard a little girl screaming in the background and at first thought Kayla had fallen in the lake but soon realized she had a fish on and a good one. She played the fish to the bank. Garrett watched in amazement as Mommy pulled the 12-inch Crappie from the fish less waters of Lake Barkley. The excitement is indescribable. Pandemonium was breaking out on the banks of Lake Barkley. When the dust settled and the picture was taken things seemed to mellow out. Of course now Garrett was fishing like a wild man possessed as Mommy fixed Kayla’s pole so that she could continue. This gave Kayla time to personally inform me that there were too fish in Lake Barkley and that she knew there had to be. She gave me a lesson on catching crappie. Where to cast the bobber, how deep the bait was from the bobber. She even told me how to know when you were about to get a bite by watching how your bobber was leaning. These were all good lessons that I could use and of course I told her so. I really believe Garrett learned a lesson that day and was speechless about the success of his little sister. Garrett now shows much more patience and catches many more fish because of it. He especially enjoys Cat fishing at night and shows great patience as he watches his watch and becomes more giddy as the minutes roll passed his bedtime. He also enjoys listening to the owls, his favorite bird.

It was a year later before I saw just how patient Garrett had become, with fishing anyway. We were camping on Lake Barkley with the boat. It was hot during the day so we spent those hours floating in the lake and inner tubing behind the boat. I mentioned that I was going to go cat fishing and did anyone want to join me. Garrett was ready to go while Kayla jumped on the opportunity to hang with her Mommy. I informed Garrett that this was not the same as fishing for Bluegills and that it could get boring. He told me that was ok and we headed out. I prepared myself for much complaining but surprisingly not a single complaint emerged.

We anchored the boat not too far from camp. Garrett could see the fire that he insisted on building up before leaving. He informed me that if we got lost we had a way to find our camp. There were plenty of lights throughout the campground but I let him build the fire and he felt good about marking our tent. I could tell it gave him more confidence about going into the darkness.

I hurried to get Garrett’s line in the water. It was rigged with a small hook, for channel cats, and a ball of chicken blood dough bait. Above the blood bait was a great bobber for anyone night fishing but especially great for young people. It was a lighted bobber and Garrett thought that was so cool. The bobber also has ball bearings inside so that you can hear it rattle when you get the slightest nibble. It really does work and within an hour the bearings began to rattle. Amazingly with the darkness we could not see the bobber moving, even with it lighted, but we could hear it rattling until finally it went down. What a great way to fish for catfish especially for kids.

Garrett landed the channel cat of about two pounds and quickly demanded a new stinky bait and I quickly baited with a smile all the while congratulating Garrett on his great catch and more importantly I commended him on his patience. Garrett caught another catfish that night and had a great time listening to the Owls along the lake and watching the stars. He located the big dipper and occasionally I caught him searching for the fire back at camp. The boat moved a bit with the currents and the fire was a fixed point Garrett could focus on and feel safe that we were not drifting to who knows where.

Garrett and I have fished a few fishless nights since then but with no complaints. He has been asking to journey a bit farther from camp as the adventurer inside fights to get out. We even made a trip out during our last camping trip to fish for bass. Garrett threw a Rapala while I fished a plastic worm. Garrett did well and without a single strike maintained his angling composure and even learned, primarily on his own, how to cast a spinning reel. I think young Garrett knew the possibility was real for hooking a large fish and he fished hard. Garrett was asking several questions about bass fishing until it all ended with the distinct sound of a pair of glasses plopping into the abyss of Lake Barkley after swatting a giant mosquito that had dive-bombed his little ear. This called for some cheering up. It helped by informing Garrett of the many pairs of glasses I had dropped into lakes and oceans all over the world including a pair dropped into the Persian Gulf during Desert Storm as I searched the depths for fish I might catch if I could find a pole. I assured Garrett it wasn’t a big deal and he seemed to cheer up. The campfire and roasted marsh mellows helped too after we got back to camp.

The first step to getting a young person interested in fishing is to be beyond patient yourself. If you think you are patient wait until you add a young angler or two and you will soon learn the meaning of beyond patience. It can be trying at times but it is very important to bite your tongue at times and answer off the wall questions at others.

It is up to us to help guide young people into fishing and the outdoors. So think about introducing a young person to the outdoors and if you are wondering the best way to do that you might want to start with bread-dough and Bluegills.