Alaska is home to many species of fish with nearly as many, if not more, ways to pursue them. Much has been written about these species and the ways of catching them but one species, special to me, has escaped stardom. The Sailfish of the North or Arctic Grayling. Grayling thrive in the many free-flowing rivers and creeks as well as many still waters throughout Alaska. The Grayling tends to escape anglers attention as their focus is on larger and more famous species such as Salmon, Halibut and Rainbows. This lack of attention leaves the Grayling free to roam, feeding relentlessly on bugs, eggs and fry that reside in those rivers, creeks and lakes and with essentially no pressure from anglers. It is this lack of pressure that entices anglers that enjoy solitude and beauty during their angling adventures, something of the past, some might say, of other species and locations that harbor them. 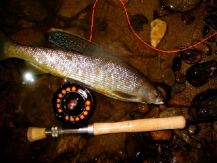 There are many opportunities to pursue Grayling in Alaska and is a great way to get away from it all. Grayling can take you away from the coastal watersheds and into some remarkable parts of the Last Frontier. You can find Grayling in most any free flowing stream and in many lakes throughout interior Alaska. Many rivers are silted by melting glaciers in the summer but run clearer in the winter and become wintering grounds for big Grayling. In the summer the Grayling move up the many tributaries, that feed these larger rivers, to feed and spawn. Find a good size tributary emptying into one of these rivers and you should find plenty of action for light spinning gear or fly rod. There are also plenty of clear rivers that are both winter as well as summer haunts for the Grayling. These rivers can be a bit tough to fish but can provide excellent results and big Grayling. Spin fisherman can handle the larger rivers a little better than fly anglers just because of the weight of the spinner getting the hook down through swift current and deep pools.

Grayling are ferocious feeders and can keep you busy if you find a good spot, which isn’t real hard to do in Alaska. Spinners work great on light spinning rod and reel with light line of maybe four-pound test. Grayling really strike a lure and engulf it. If catch and release is your intentions then you might want to think about single hook spinners and check the regulations for the area you plan to fish as some have single hook use only. If you do not have any or can’t locate any for your trip you can cut two of the hooks from the treble and make a single or as I have done in the past just install a single hook onto the spinner making sure to match the size hook to the size spinner in order to keep it proportional. Normally one would wade upstream but with a spinner I prefer to wade downstream and take advantage of the current. Be sure to keep to the shoreline to keep from announcing your presence downstream, although I have found that as you wade downstream many morsels tend to be dislodged from the bottom for the Grayling waiting downstream causing a feeding frenzy by the time you arrive. Both points are argued but it has been my experience that in Alaska the Grayling are not easily spooked like many of the rivers in the lower 48 as many of the fish you catch, in most cases, have never seen a hook.

If you plan on use spinning gear think light but not too light. There are some big Grayling out there that can give you a fit on an ultra-light outfit but more importantly there are Rainbows in many streams that hold Grayling. The last thing you want is a 24-inch Rainbow to surprise you and get off because your gear was too light. Personally, unless you know the water you will be fishing is small, and even then you could get a surprise, I would go with medium light or even a medium weight rod. Many of these rivers and lakes that are primarily targeted for Grayling often times hold some monster Rainbow’s, so be prepared. Small spinners of any make should work fine pulled through likely spots with a steady retrieve. Remember that Grayling feed aggressively and their mouths are a bit fragile when filled with a treble hook. Please think about spinners with single hooks and don’t worry about hook ups because with their aggressive takes they pretty much hook themselves.

If you plan to pursue this great little member of the Charr family with a flyrod, a 3 to 5 weight works great. Depending on the size of river you are fishing casting distance can vary greatly from ten feet to sixty. I prefer floating line as an all around fly line except on the larger, deeper rivers where sometimes a sink tip is needed to thoroughly cover its many Grayling haunts from top to bottom in this case you may want to bring along a separate spool loaded with the two different lines in order to quickly change to the desired application for each run. Leaders are usually simple in Alaska. The fish here tend to be less line shy due to lack of experience. A single piece of monofilament is the usual choice but some might find that a tapered or hand tied graduated leader turns the fly over better in some cases so practice or just bring some along in case the simple leader doesn’t work for you. I used a twenty-dollar fly reel for years in Alaska for everything including Salmon. I have since moved up to something with a smooth drag system, which is a necessity for serious Salmon fishing, but for the Grayling as long as it turns and holds line you should be all right as most of your catches will probably never reach the reel.

Fly anglers will love the willingness of the Grayling to attack just about any fly they choose to tie on. Of course there are certain patterns at certain times that produce better than others. For you dry fly enthusiast The Elk Hair Caddis is hard to beat especially early in the season on rivers with a Salmon run. Rivers without a Salmon run are void of eggs and therefore the egg pattern, while still effective to some extent, tends to go unnoticed when compared to the more traditional trout flies such as the Elk Hair Caddis, The Humpy, Sculpin, Alevin and of course the Woolly Bugger. Sometimes very small midge patterns work well but generally the action is so good with the other patterns you won’t even think about them. One go to pattern you should have in your box is the Griffith’s Gnat and the Mosquito Emerger. These patterns work well throughout the season. Fish a dry on a dead drift but then let it swing at the end and even strip the fly in before making the next cast. Grayling will often follow your fly as it drifts and smack it on the swing or the strip. If there are Salmon present in the river you are fishing then the egg pattern is hard to beat. The Egg-Sucking Leech is a great pattern as it simulates an egg on the drift and a sculpin or fry on the strip.

Grayling are territorial and one thing I have noticed is when your fly is getting bombarded by small Grayling it usually means that there are no big Grayling in that hole or run. If you are seeking trophy Grayling you will want to consider a streamer pattern and deep pools. A Grayling will occupy a certain hole year after year provided it hasn’t been altered by changes over the winter. They choose these deep holes, remain as motionless as possible to maintain their energy, and sometimes will move just a short distance to eat. These Grayling protect their area aggressively chasing away any intruders and gobbling up any sign of protein that might drift by. If you locate a nice looking hole or run that seems to be fishless, even though you were just catching fish after fish the run before, stay put and fish that hole thoroughly with different patterns with different techniques as there is a good chance there is a big Grayling lurking somewhere below. One good way to entice a stubborn fish is to cast downstream and very slowly strip the streamer pattern upstream allowing the current to keep the fly suspended above the bottom. This works with spinners as well. As you pause the fly move your rod tip from side to side and watch as the fly follows the rod tip and you are able to cover a very large section of the run and give that big Grayling a chance to easily make a meal out of your fly. This technique is slow and without the excitement of a swirling take on the surface but if it is trophy Grayling you are after this technique works great.

Grayling is the last frontier of angling. With so much emphasis put on the other species found here in this anglers paradise the Grayling continues to go unnoticed by the many anglers that journey here each year. When I talk about the great trips to remote rivers and lakes and tell about the great fun I had catching Grayling after Grayling people listen and you can see their eyes light up then they say. “You know I have been meaning to try out Grayling fishing but I never get around to it”. If you enjoy pristine waters with spectacular views without all the people and nearly continuous action on many streams then you should give the Arctic Grayling a try and experience the last frontier of angling.