Lakers On The Fly

Lakers On The Fly by Ken McBroom
article copyright

The name Lake Trout lends a slight misnomer to the actual species of this incredible fish that is actually not a trout at all, but a char. The Lake Trout resides in some of the most spectacular places on earth, and the trip that spurred this article is no exception.

The Newhalen River near Iliamna Alaska is where this trip took place, and the intention was to land some nice early season Rainbows. Although Rainbows were indeed landed, the Lake Trout took center stage as they fed in frenzies on the tiny smolt that were venturing out into the currents for the first time.

The first feeding frenzy we spotted drew much attention as we expected huge Rainbows were cruising the shallows. Not one person expected what happened next. Wham! The Marabou Muddler was engulfed and was stripped quickly through the rising pod of what turned out to be Lake Trout. 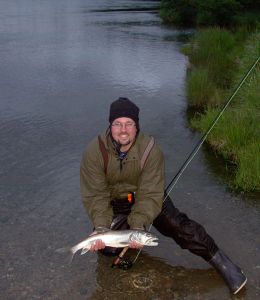 Lake Trout, for the most part, tend to elude most fly-fishing lore and go unnoticed. The depth at which they dwell and the difficulty in locating a group of fish to target within the parameters of the fly angler all contribute to its lack of attention, however there is an exception and that is early spring just after break-up when Lake Trout, usually in the 20-30 inch range, journey from the big lakes and cruise the shallows of the rivers that enter and exit them. So while Rainbows, Dollies, Coho and Kings steal the lime light, the Lake Trout still continue, unmolested, gorging on the many salmon fry that struggle in the currents as they begin to learn the perils of life.

It is during this time that fly anglers can easily locate and entice Lakers into taking their fly, even on top. The Lakers can be located by the many swirls and splashes as they travel in schools. They remind me of my younger days when we used to go to the lake before school in hopes of catching rockfish “in the jumps” and hopefully catch one without being too late for class.

Once the frenzy is located the angler must quickly introduce their fly into the frenzy and utilize a fast strip-stop retrieve to get the Lakers attention. The takes are no joke and I have found the quicker you retrieve the more attention you get. One may want to hesitate for just a second after a few feet of retrieve before resuming the fast strip technique.

Any fly pattern that imitates a small fish should do the trick, but I can only speak for the Maribou Muddler as I found no reason to change while the Lakers continued to slam them with reckless abandon. There is one note of interest you might want to know. Just because of the hard takes don’t think the Lakers are a pushover. For some reason the Lakers are hard to hook. It seems they strike haphazardly at the fly but I think nerves played a huge part of the misses I encountered.

If you have ever had the opportunity to fish Northerns or Musky on top water you are familiar with the torpedo wake as the fish ambushes your fly or lure from behind. With Lake Trout you get the same visible approach which can unnerve an angler as they try to predict when the strike will occur as the Laker dips under the fly, before they come from under for the take. Often times I set the hook too soon, missing the fish entirely and sending him searching for a new prey as I duck to miss my fly.

The Lake Trout may not get much attention, but that is quite all right with me. I will be glad to have these dwellers of the deep to myself and will also enjoy the Rainbows, Dollies and Grayling in between. If you are like myself and prefer less crowded angling you should try early spring in Alaska and remember the Lake Trout. The forgotten Lake Trout just might be an added species found in your journals of your trip of a lifetime whether you expect it or not.

Staff Articles
Spirit Of The Caribou
The Lifelong Angler