The cold front proved to put the Gills down with just a rare take in deep water with a cricket. Just the day before, big bluegills were pouncing on our red worms and crickets in all depths, providing ample fun for the kids and adults alike, Fun that was much missed on this day after the front, that is until the wind began to kick up.

By now the kids had lost interest in fishing and begged to go back to the cabin. I was also ready for some lunch. We stayed a little while longer and it is a good thing, as we witnessed a great spectacle unfold before us. A grasshopper hatch, and a big one! Fish began to surface all around us as we attempted, unsuccessfully, to entice one to our bait.

The sight of rising fish did little for the kid’s moral, but for dad the rise was wonderful and the fly rod was just a few minutes away by electric motor, and rigged with a popping bug to boot. Ok, are we ready to go in now? Yes sir, was the enthusiastic response throughout the small jon boat, and the trolling motor began to push us slowly yet quietly back to our cabin by the lake.

Strong gusts of wind began to move through the trees, and as I made my way back out, fly rod ready, I noticed grasshoppers everywhere. I attempted a few cast in the open water but had no takers, even though there were several bluegills feeding around my popper. I can only guess that maybe the hoppers were too plentiful and the area too great for them to single out my presentation over the real thing. I am sure with some patience I could have come up with some fish, but decided to move to the shore line where the boulders and stumps could help me pin point the location of the fish as they waited patiently at their respective ambush points to pounce on an unfortunate grasshopper carried reluctantly from the grass and trees to the waters surface.

I began my search for the big gills, which I knew prowled the small lake, with untargeted casts along the shoreline with no takers. The activity here was much less than the open water as the many swirls and splashes behind me indicated. I was thinking about moving back out in the open water as I spotted a huge stump just under the surface next to the bank. I made a point this time to place the popper tight to the shoreline and work it over the stump. 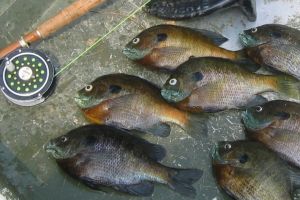 The fly landed with a plop next to shore. I waited a good twenty seconds, then twitched the popper ever so slightly and waited again. On the third twitch, before the ripples could fully dissipate, I saw a large bluegill come from somewhere in the stump and engulf the small popper before turning towards the darkness of his domain. I set the hook and turned the big gill before he reached the tangled roots below. A pattern was born and I worked the bank this way for a couple hours of top-water action including a couple of good bass.

Some people, including myself, take bluegill for granted. We tend to believe we can just simply throw bait or a fly anywhere and pick up a few bluegill. Often times this is true but when searching for big bluegills it can sometimes be a challenge. Sometimes you might find a school of a hundred while other times they are scattered and holding tight to cover, as I found out on my bluegill trip to Tennessee.

On this particular day I did better with my fly rod than with conventional tackle with crickets, which had been hot until a cold front blew in and slowed down the biting. The front had turned the bluegills off, but when the grasshoppers began to hit the water they just could not resist the highly nutritional meals kicking around on the surface of the small Tennessee lake.

Big bluegills on top-water are as exciting as it gets, especially on a two or three weight fly rod. Sometimes a four weight is needed if you are unable to get out of the wind. Small rubber leggy poppers are fine. I tried at first cutting the rubber legs off my popper as it seemed too bulky, but got no strikes until I tied a new popper on and left the legs attached. Of course you will need floating fly line and attached to the end you will need a light weight leader of 2 to 4 pounds. You could tie your own tapered leader or purchase a machine tapered leader, but the easiest and least expensive leader, that works just fine, is 3 to 6 feet of monofilament and adjust your leader to match your presentation.

There are many flies to choose from out there and even more if you tie your own. On most occasions color on a popper will not matter but I have seen on some occasions when a certain color outperformed another, so it is a good idea to carry an assortment. Sometimes the fish prefer less bulk, and removing the rubber legs will trigger more strikes. A good way to stay prepared is have a couple of flies in the box with the legs already removed.

The presentation of your popper can be simple or complex, it all depends on what the fish want that day or even that hour. There are times when a half hearted cast will produce, while other times only a well placed presentation and patient retrieve will bring them up. You have to experiment. On this trip it seemed as though the bluegills were recklessly slamming the surface gobbling up anything that moved. I found out that was not the case and had to adjust my presentation often until I finally hit on a presentation that worked, which was opposite of what I initially thought would work. Tight to cover, fly placed inches from shore and a very light twitch with a long pause in between was all that seemed to work on this day, but once the pattern was discovered nearly every cast triggered a strike from a big bluegill.

Bluegill on a fly rod are fun to catch, even for us adults. The next time you are on the water and begin to see grasshoppers floating on the surface grab the fly rod and popper, and find the presentation they want and have some fun. Just another hint about those grasshoppers, at night when the bluegills go to sleep, the channel cats wake up and love those grasshoppers the gills missed. They will cruise the bank gobbling them up. You talk about some fun for the whole family, but that is for another article. Have some fun out there and I hope this article has you thinking of where some big gills might be. I know it’s got me fired up and I think I will go tie some hoppers for my next trip.