The Obey River – Wild and Scenic

The canoe slid easily down the tall grass that grew along Tennessee’s Obey River. The paddles and gear were next including my fly rod and vest. A lady, who seemed frustrated but determined, stared curiously into the River from a pier along the shore. A single worm covered hook swung from her line with a small split-shot just above. A juicy morsel intended to entice a small school of trout lingering below within the shade of the pier. It was obvious the lady had been trying long and hard to hook one. Her tackle box lay next to her. Its contents tangled and spilled all around the pier. A small Styrofoam container sat, half spilled, on the bench. Its dirt littered the bench and a lone red wiggler struggled to find more, it was the perfect picture of a desperate attempt to get a worm on the hook as a trout swam by.

I could tell that the trout’s refusal to bite had drained the lady’s excitement but hope still lingered as the trout floated gracefully, head against the current, just below the pier. Occasionally a trout would separate itself from the school and drift several feet downstream then slowly make its way back upstream to join the others, always showing little or no interest in the presentations dropped in its path from the pier above. It was beginning to look as though this might be just a nice canoe trip, as it seemed that on this day the trout had lockjaw. But that was fine, as a trip down a Tennessee wild and scenic river really didn’t seem so bad.

I could feel the temperature drop as I eased down to the edge of the river to get into the canoe. The day was hot and the cold water conditioned the air. I was already enjoying the journey; I waved to the lady on the pier and eased down the beautiful Obey River wondering if I would soon be as frustrated as she. The canoe glided silently along. I noticed many large boulders passing beneath me much faster that it seemed they should. My hopes were high as I strung the rod and tied on a black woolly bugger. 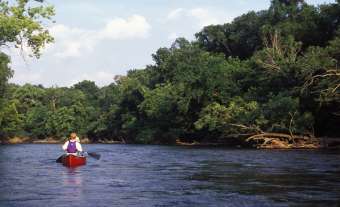 As I drifted along, the reasons for listing this river as wild and scenic became very obvious. The towering rock cliffs and the deep forest surrounding the river is home to the many types of birds and wildlife that happily reside along this beautiful river. Like the Kingfisher that surprised me as it swooped down, dipping its bill into the water with such precision the calm surface was barely disturbed. I watched as the Kingfisher flew to a limb that hung over the river and quickly made a meal of the small fish it had successfully angled from the river. He then flew from limb to limb in search for more. I cast the woolly bugger into the many pockets along the edge of the river’s bank. A wild turkey scratched the leaves in search of bugs and grubs. It was close enough that I could tell it was having much better luck at its endeavor than I was with mine.

The evening chill began to mix with the shill of the river and I soon found myself searching for more clothes. I beached the canoe on a gravel bar and slipped lazily into my fleece pullover. Standing alone on that gravel bar I admired the beauty surrounding me. The moment caused me to bethink a similar day on an unnamed stream in Canada when I realized that the great thing about trout fishing is you seldom find yourself in a less than pristine environment. Yes the fishing was slow but the day was far from wasted as they seldom are on such a journey.

Then I noticed there was a deadfall in the river and was within easy range of the 3wt G-Loomis. I knew this was my final chance of the day. It was nice casting from shore but it took a few pitiful attempts to get back the rhythm. Finally, the fly hit its mark just above the deadfall. The current was playing tricks as it swirled around the huge dead tree and after many cast and observations, I finally laid the fly where I thought the current would take it underneath the tree and hopefully into the home of a nice hungry trout. The fly drifted in the fast current and sucked down into the darkness created by the old dead tree. I knew the fly should only be under a couple seconds before being brought out by the swirling current above. When the fly did not emerge I was afraid it had caught on a limb. I eased the rod tip up slowly in an attempt to dislodge the small hook and save my fly, when surprisingly I felt a tug and before I could set the hook the fly returned to the surface. It was lodged in the mouth of a beautiful brown trout. Fortunately the hook held true as I regained my composure and it would be several leaps and runs before the brown was whipped and slowly came to the net. I smiled.

I measured the trout at eighteen inches and released it back into the river. I watched as it swam back to its home under the deadfall. I stared into the swirling water as I broke down the fly rod and returned to the canoe to begin my journey down river.

The crickets were beginning their song just as the fireflies were taking flight from out of the tall grass in the fields along the river. The sun was barely visible now in the west. A thick fog rose around me from the river as the flowing water became flowing fog and the scene was surreal. I remember the many famous rivers I have fished before and after. Rivers Like the Madison, the Firehole, the Gardner, the Yellowstone, the Snake and the Bow River in Canada. I find it fitting that I can say that my biggest Brown trout to date came to my fly while on a wonderful journey down a wild and scenic river in the great state I call home, Tennessee.