The Sheepeater recurve is a bow that is built to hunt in thick cover and blinds. This is a bow that is designed to hunt, not a bow to look pretty on Friday night, although I think it looks good. The length when strung is 48″ from tip to tip and it weighs a very light 12.4 ounces. It has a very small grip that is wrapped with Rattan that is not going to slip no matter what. It also has very reflexed static tip limbs. 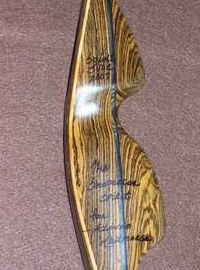 Brent has informed me the Sheepeater has just been given a new grip option that I feel needs to be shown here. I have only seen photos of it , so I cannot coment other than to say I like what I see. I think you will also.

It shoots with ample performance with no shock and it is a silent killer. The sheepeater came with a thick 16 strand Fast Flight string that I could not get my carbon arrows around unless I stretched the nock very wide. I replaced this with a 10 strand DF97 padded loop string on day one. The gain I observed at the chrono is sufficient to warrant a better string than the one that came with it. The string length for this bow is 47 1/2″.

I like short bows and short bows are one thing I think many of you are missing out on because of repeated bad stories from days gone by. 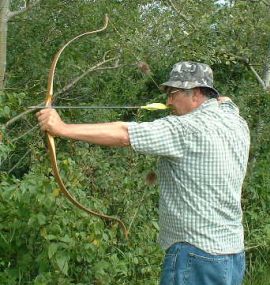 The Sheepeater is a bow that proves a short bow can be very accurate, and a deadly hunting bow. I am not trying to say it is a top target contender, however it is easy for me to shoot kill zones on 3D with. I expect that it will do the same when I hunt with it this year. From the blinds I like to hunt in, it is extremely easy to shoot. There is no worry about limb clearance and trying to get into a better position without making a sound that will spook the game.

Shooting in thick cover is always a problem with what I call a normal length bow but with the Sheepeater I am far less apt to have limb clearence issues that give problems with longer bows. I gave this a test while on the 3D practice course by stepping away from the stakes to where limb clearance was an issue for other bows and was able to easily and cleanly shoot. Try shooting a 60 to 66″ bow in thick bush and you will soon appreciate the little guys. Try it in a blind and you will really appreciate it.

Sitting on the ground or kneeling is easy shooting with this bow. Again the short limbs let me shoot where I would have difficulty shooting longer bows.

One of the big problems with many recurves is noise, but the static tip Sheepeater has all but eleminated this. A set of beaver ball silencers and it became silent. I shoot 3 under so finger pinch is not an issue for me at all. I have had friends with long arms draw it to 30″ without any complaints. 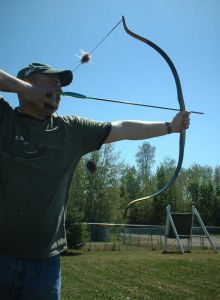 When the bow is strung up many have asked me if it was a kids bow, but they soon see it is not a kids bow at all. We are so used to long bows that it is a natural thing to think. When they see it is 50# @28″ and then shoot it they get a new perspective on what a hunting bow can look like.

The finish on the Sheepeater is good, and it is not going to shine and give you away. The limbs on this bow are made up with Red Elm and clear glass on the back and black glass on the belly over Maple actionwood with osage reinforcements on the static tips to match the riser. The nock reinforcements are made from a opaque horn over Osage and look good. The riser is Osage and has the optional cut in shelf that I requested.

There are 2 concerns on this bow.

The top limb string groove is not centered, and measures 1/2″ on the right side and 3/8″ on the left side. The bottom limb string groove is centered as expected.The string does sit in its groove, and the bow shoots very well. The tiller is good and the limbs are straight, so this is not a big issue for me.

The second issue is on the side of the top limb in the static tip. A glue line has a tiny void. This is in a spot where there is no flex and I cannot see it ever being a problem. A tiny dot of Superglue and the void is gone. I am not worried at all about it, but feel it needs to be mentioned here.

I like the Sheepeater a lot and these items should never become problems. I expect that they will not be found on future bows since I pointed them out to Brent and received his assurance that he will make sure these are not going to be repeated on future bows.

This bow reminds me a lot of the horsebow, but it has static recurve tips instead of shias on it’s very thin limbs. The grip is also small enough to allow me to shoot it with a thumb ring from the left side. Very few bows today are slim enough to let us shoot a thumb ring if you are curious about this style of shooting.

I was skeptical about the small grip at first as it is very small. I am a big fan of small grips but the Sheepeater made me think twice about just how small I liked them untill I shot it.

If you have a tendency to torque a bow you will like this grip. It is nearly torque proof. Before you decide a small grip and a short bow is not to your taste I realy think you should shoot one. You may be surprised at the results and change your mind. I am very pleased at how well the Sheepeater shoots and I do plan to have it on more than one trip this year during hunting season.

When I did the chronograph testing I decided to limit the Sheepeater to heavy weight arrows, as the bow is designed to hunt, and not to shoot light target arrows. I think it handles heavy arrows quite well for a short bow and I am surprised and pleased at the speeds it shoots them. This is a serious hunting bow with a great nifty factor, and a serious attitude. 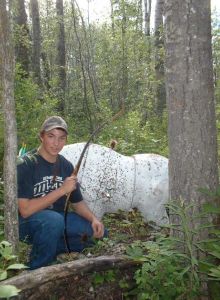 Today at the range I met a young man that had never shot a traditional Bow before. Jared was watching us shoot and seemed interested in our bows so I asked him if he wanted to try one.

After trying a few bows and some quick lessons he was hitting a small piece of paper at 20 yards and semed to be having too much fun to stop. He chose the Sheepeater to use when he came along on the 3D course and shot his first trad 3D with it.

Jared is a fellow with no experience shooting a traditional bow and with that no bad habits either. He has a naturat ability it seems as he rarely missed a target, and most shots were on the money. This photo above is Jared with a 10 and a 10 X from 20 yards after just 1 hour shooting the Sheepeater.

It is a good thing he did not know short light bows with small grips are not accurate!!!

I think if Jared can shoot the Sheepeater like this in 1 hour it proves those old wives tales abour short bows are just that, “Old wives tales”.

He tried several other bows today and as we parted company he took down the information on where to buy his own Sheepeater. This was followed by asking when we were coming back and if he could shoot it again.

I think I have saved another one from the “Dark Side” of archery. His compound will most likely be gathering dust in the near future.

In closing I want to say that I am very impressed with the Sheepeater Spirit. It is a unique bow that I feel is designed to hunt, and it has all the qualities of a very good hunting bow. It is light in weight for long trips, small in size for tight places, silent and shock free.

Combine this with being easy to shoot, as proven by Jared, it is a winner. When a novice can pick it up and shoot this well in just an hour, it must be considered an easy bow to shoot. With some luck I will be posting a success photo later this fall when the little Sheepeater goes hunting with me. I know the bow can do it if I do my part.

Brent Rudolph is a sponsor to the Saint Judes Childrens Hospital and makes a donation from every bow that is sold.