Finding the perfect woman can be like finding a ridge top rub line punctuated by a still steaming scrape in the middle of a stand of white oaks the size of a football field on a cold November morning. It ain’t easy. But hang in there fellows, there is hope. I just happened to stumble on the perfect woman and married her this past weekend. After several years of courting with our anniversary being my birthday, which fell smack in the middle of the Tennessee rut, I knew that I had to work on that date and be sure our wedding anniversary fell somewhere outside the magical two weeks in November. Most of those anniversaries were spent afield while my very understanding future wife waited patiently at the house and at least seemed to be all right with dinner and a movie spent talking about the sights and sounds of that days hunt.

Tammy, my wife even attended an archery class and I purchased a bow and all the equipment for her to join me afield. She was a natural, hitting the bull’s eye every shot at twenty-five yards after only a few shots and little instruction. We hunted together a couple of times side by side in different trees. She watched as I arrowed a doe but found that rising well before daylight and sitting in a tree just was not her cup of tea. But she tried and that’s what counts. It could be that I was to blame as I promised all along that she could hunt the evening with me when the weather was warm and from the ground. What do I do but get her up at 4 am on a drizzly morning and put her twenty five feet in a tree stand, because that was the best time for this particular stand. She says she might try again in the evenings from the ground as she loves to shoot and plans to continue target shooting. 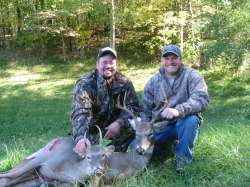 The week before the wedding consisted of my bachelor party. Four days of bow hunting with a good friend and hunting partner, which is about as hard to find as the perfect woman. We harvested three deer and missed a couple more. Josh, a long time friend managed to arrow a nice eight pointer after a short rattling sequence and a couple grunts followed by a long wait as the buck slowly gained the courage to come on in after 45 minutes of pacing and scent checking, see photo. It was a great bachelor party and kept us both away from those wilder bachelor parties that tend to get you into trouble. Lucky we were successful and had the proof that we did hunt. The spike in the photo was shot at thirty paces as Josh watched, just ten more paces away, from his tree where he was attempting to rattle me in a monster in the swamp that we had hunted for years. It was like old times even though the deer have stopped using that particular swamp like they used to it was great to harvest a deer there next to my buddy. He was in a tree where he arrowed a nice ten pointer after I had missed it just two weeks before. That was several years ago.

The wedding took place in the Smokey Mountains and turned out great with a bride so beautiful she made me actually look presentable. There was fresh venison barbecue for the reception and a groom’s cake shaped like the head of a ten pointer. It was great and some of the wedding gifts would help with the gas we used on our honeymoon.

After the wedding we quickly made our way to our honeymoon cruise aboard a 60-foot houseboat for 7 days. Just the two of us. My new bride proved to be the perfect woman as she helped carry the canoe to the houseboat and helped load my hunting gear for the trip. Now before you start jumping to conclusions let it be known that my beautiful new wife was offered a cozy secluded cabin high in the Smokey Mountains and she chose the houseboat. She knew that it would be nice on the houseboat in October and with the hot tub on top I could hunt all day if I wanted.

Those seven days were great and ones we will never forget. I hunted a little and managed to just miss a five pointer and I rattled in an awesome eight pointer but was unable to get a shot as we surprised each other at just twenty paces and the stare down ended with him returning the way he had come. We watched deer and coyotes from the hot tub as well as shooting stars and Bald Eagles. We caught big blue gills and enjoyed fillet of blue gill and hushpuppies on a rainy night anchored in a small secluded cove surrounded by persimmon trees and Kingfishers fishing for the many spawning shad around the bank.

As I settle into the married life I consider myself lucky to have found the perfect woman. A woman that is beautiful inside and out. A woman who accepts and understands that the outdoors is a vital part of my life. A woman who has even tried to endure probably the ultimate test in patience, bow hunting, just in an attempt to be with me afield. A woman that hangs in there when the crappie just are not biting or I just can’t find them. A woman who actually enjoyed getting charged by an eight foot Brown Bear on a fly fishing trip up a small creek in Alaska only becoming afraid when I did. Watching the Whales together in Southeast Alaska. The moose in Denali National Park. Flipping our canoe while fly-fishing in the shadow of Mount McKinley. All these things and many more have all been apart of making memories for us and we plan to make many more.

We found a persimmon tree that should just be getting ripe. I think we will check it out and see if we can get a few for the awesome persimmon pudding my lovely wife has perfected and while we are down there I think I will check for some sign as it is near my favorite stand site. The past two weeks have been great and we have two more to go before we head back to the real world of telephones and responsibilities. Until then we will enjoy this time together and maybe we will enjoy back strap for breakfast.

I Love You Honey.