Many of the outlaw wolves have become semi romantic characters much like the human outlaws of the Wild West. Their rampages and exploits were published in newspapers along side the articles of the human renegades. Although many of these last wolves were loners, it was not always the case.

This brings us to the infamous Custer Wolf of South Dakota. This wolf’s mate and pups had been killed many years earlier and he never again ran with other wolves. Although he reined his territory without the presence of other wolves, he took up company with a pair of coyotes. Not necessarily a friendly union, but he did use them in his methods of avoiding capture.

The Custer Wolf was by far the most notorious of the outlaw wolves, reputedly having slaughtered horses and cattle in the excess of 25,000 dollars! He is said to be responsible for the ruin of several ranchers during his time. That is not all he ruined however. The reputation of many “would be” wolf hunters and trappers were also demolished. The large bounty of $500 on his head attracted a steady stream of these like-minded men. It was a lure hard to resist for ranch hands bringing home around $25 a month in salary.

One such bounty hunter chased the Custer Wolf for 5 entire years, and another for 4 years before giving up.

With each unsuccessful attempt, the Custer Wolf’s reputation amplified. He made headlines in newspapers, both local and abroad.

One such article printed him as “”the cruelest, the most sagacious, and most successful animal outlaw” Another was read as saying he was “the master criminal of the animal world.” The most colorful article I have found was one saying this wolf was the product of a mating between wolf and mountain lion, “possessing the craftiness of both and the cruelty of hell.”

Then one day… he crossed paths with Harry Percival Williams!

Up to the point of Mr. Williams arrival, the Custer wolf had been regularly ranging over 300 square miles of South Dakota, and even sometimes being reported in Wyoming and Nebraska. Williams, a 44-year-old U.S. Biological Survey supervisor, knew he was in for a challenge. He had worked many years as the top government hunter, capturing over a thousand problem wolves throughout the country. So with Springfield rifle in hand, Williams was less than hopeful as he set out for the Black Hills of South Dakota. 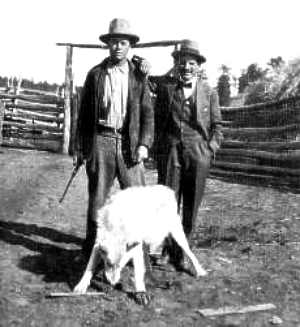 The Custer Wolf’s hunting behavior and practices were deviant and abnormal. He was not killing for need, and killed far more than one wolf would ever consume for survival. He not only killed, but maimed the animals, leaving many ranchers to find cattle with sheared off tails or large chunks of flesh torn from the rump. He had acquired a taste for unborn calves. Cows were found dead; bellies ripped open, fetuses gone. Some say he was acting out revenge on humans who took his family pack from him.

A few days after William’s search began; he came across some wolf tracks he thought to be the Custer’s. He returned the next day wearing boots smeared with fresh female wolf scent and set some steel traps. As with most wolf trappers, Williams had his own technique for masking or eliminating human scent. The traps were boiled for half a day and buried in cow manure for many more. When setting the traps, Williams never set a foot on the bare ground, but always spread out a cowhide before dismounting. He sprinkled the entire area with female wolf urine before leaving.

As Williams expected, the traps remained empty. However, the wolf had shown great interest in the female scent. Williams explored the area further and found where the Custer wolf had began to excavate a former den, possibly in hopes of obtaining a new mate.

Williams trailed the wolf for many weeks. He did manage a glimpse of him on a ridge, but while reaching for his rifle, he spooked two nearby coyotes instead, alerting the already wary wolf. After several months, Williams had determined the wolf’s pattern of traveling a particular mountain ridge near a creek. The traps set there remained empty with the exception of a few tufts of hair.

There were times Williams watched the wolf from afar with his binoculars. One day he witnessed the Custer wolf scatter a herd of horses only to round them up again like a sheep dog before trotting off into the distance. Other peculiar behavior was observed when Williams found an empty beer bottle on the sandy dry creek bed. It took a while to read the story of the wolf tracks there, but he did determine the wolf had spent several hours playing with the can, his sole purpose being to stand it upright.

As time passed, Williams came to understand that the wolf he had watched at a distance for many months was now watching him. The wolf started following him at a parallel path several hundred yards away. If Williams reached for his wallet or tobacco, the wolf would stop and watch. When Williams’s hand started for his rifle…the wolf disappeared before his fingers ever touched the gunstock.

This was no longer a hunt, but a game. A game the Custer wolf both fully understood and controlled. Never far away were the pair of coyotes who time after time alerted the wolf of danger.

While watching the wolf play with a carcass one day, Williams thought of an idea as the coyotes moved into investigate the kill. Dismounting, he crawled close and shot the pair of them. He carried both coyotes to a deep ravine and threw them to the bottom. He then went back to the steer carcass and set traps around it.

The following day, Williams not only found that the wolf had pulled the carcass over the traps to spring them, but also the wolf had somehow retrieved the bodies of the two coyotes from the deep ravine. A feat he felt physically impossible for one wolf.

Looking at the steer carcass, which had been hauled over his traps, a new game sprang to William’s mind. He moved the carcass once again and set blind sets randomly all over the area around the steer and along the path.

Throughout the night, the Custer wolf returned and in his attempt to move the carcass back, stepped in a trap with his left forefoot. In the morning while Williams was excitedly following the trap drag marks, his hopes were crushed as he came upon the hook and chain caught in an exposed root, but no trap and no wolf. However, the trail from there was easy to follow as the wolf proceeded with a heavy steel trap still on his foot. Three long miles away, Williams came upon the Custer wolf panting and exhausted trying to hide in some brush. He had broken most of his teeth gnawing on the steel traps in his desperate and frantic attempts to rid himself of it. With blood foaming and dripping from his mouth, the wolf made an unnerving lunge to escape. Williams shot him dead. The game ended as the wolf fell lifeless at his feet.

The year was 1920. It was a crisp October afternoon when the old outlaw wolf, which they named the Custer Wolf, met his fate at the hands of Harry Williams. In this picture, you will see the Custer wolf and his winning adversary, Williams, as he stands over the submissive looking desperado. But you know, the crowd that quickly gathered as Williams entered the town with the dead wolf was deeply disappointed at the sight of this “evil” notorious legend. It was just an ordinary wolf, barely six feet long, and weighing a mere 98 pounds. It didn’t seem right that this wolf of their nightmares was so old and ragged that his pelt had turned white. But here he was, the demon of their dreams.

It seems I like to end my stories with a quote and this is not an exception. The following words are from Harry Percival Williams himself. He spoke these forty years later in an interview…. on the verge of his own death.

“I remembered all the trouble and grief he’d caused. But I tell you I’d built up such a respect for the old devil that, if he hadn’t had a trap on one foot, I just might not have killed him. I really think I might have let him go.”

Author’s note: The photo accompanying this article is taken with permission from Bruce Hampton’s The Great American Wolf. This picture shows Williams on the left holding the rifle, beside him the Custer Wolf who seems to be standing all on his own. The stance of the wolf looks to be one of submission but in fact is the result of rigor mortis.

With the picture was this caption: “Just hours after trapping and shooting the Custer Wolf in October of 1920, government hunter Harry Williams poses with its stiffened remains.”

Submitted Articles
Adventures As A Hunters Wife
History Of Wolves