I know right off the bat what most people are thinking. Icefishing? In March? Understandable for a majority of the countries regions but in the month of March you can always find those last chance ice anglers in search of various fish species willing to take an easy offered meal. One of those species that rank on the top of the list are perch. The perch arent just sought after for their delicious table fare. Their willingness to cooperate offers up some great late ice season action as the fish begin to school in larger numbers and occupy shallow water. This allows for some extremely active fishing just off the shoreline and the opportunity to fish with very little need for added equipment. In any event perch fishing should be enjoyable so make the best of these last days before we jump into the next season and open water fishing. 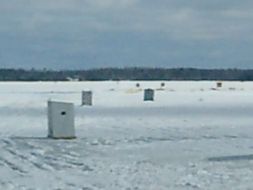 Typical late season perch hangouts relate to weeds. Relating weed patterns often results in finding new growth or green weeds which have begun to stretch towards the surface once again as brief periods of light create an active system of stimulated growth. Your basic baits will perform the best in these scenarios but hang on. Often you will find where there are schooling perch you also have northern pike. The two go hand-in-hand pretty much throughout the entire season so targeting one may expose the other. Gear should be inspected if you happen to hook into one of these underwater predators.

Small teardrops should be accompanied with a morsel of bait such as wigglers, mousies, spikes, waxies (wax worms), and small minnows. There are virtually thousands of teardrops and similar lures to use for attracting fish so you’ll need to experiment with color, action, and possibly sound until you hit on something that works for the area. Hooking any of these baits to your lure, or attractant, is very basic and for most it comes down to personal preference.

My own preference is a flourescent orange or chartreuse colored teardrop. I rig one of my two lines with each color to begin with and tip each with a minnow and a wiggler. I find that most times the small minnows will generally catch the larger perch. Running the tip of your hook through the back, just under the spine of the minnow, will keep it lively. It’s a combination that I set with a small slip bobber and let it work for itself with very little added motion through jigging. On the line with the wiggler I run the hook either vertical towards the head from the stomach or using the same method through the back vertically. This line requires some manual intervention to create movement so a little light jigging is required. In description I would liken this jigging motion to tapping a pencil on your desk as quickly as possible. Just some very quick wrist motion will work fine and grab the attention of any schooling or single perch.

Another method that works well is using a larger lure as a dropper. This can be just about anything that would be considered a spoon with the hook removed. Rig your line as you would to tie on any terminal tackle or tying a spoon directly to your line. From the bottom portion of the spoon tie a second line for your dropper line. I normally make the length of this dropper line around 18 inches before tying the teardrop. Now you have a lot of extra of flash for each motion which really increases your chances especially when fishing around weeds where visibility is limited.

This time of the season really doesnt require any type of shelter but if you are planning on bringing the family out, especially kids, you might want to have an area that they can just relax or get out of the wind now and then. A shelter can also provide a lot of visual entertainment when fishing shallow water. Many times this last season perch fishing is done in as little as 6 feet of water. A shelter provides the necessary cover to allow you to see down into the water and actually watch your bait. This can be terribly aggravating when no fish are around but when a school of perch move in it’s quite entertaining “if” you can keep the kids from shouting out “Theres some more fish!” One sure way to watch them quiet down is to have a school of perch inspecting their bait and anticipating the tug on the line when out of the weeds a big northern pike closes in the perch. Underwater predation in full view keeps most kids astonished for quite some time.

A major concern during this late season is always safety. I wouldnt recommend bringing a child a mile out on the lake during this time of the year. Old icefishing holes have begun to melt away and grow in size. What was once a 10 inch augered hole has now turned into an 18 inch circle of interest to inquisitive kids who tend to dart off at a moments notice. Currents in the deeper water eat away at the ice quicker than the shallows so keep it closer to shore and you’ll spend less time worrying and have more time for fishing. Pull your gear out on a small sled and if you have room pack a portable grill and a pack of hotdogs. The entire day changes when you have a hot meal. Like I said, make it enjoyable. 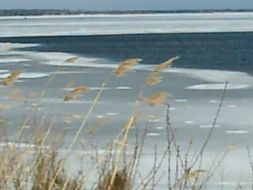 Points to consider on safety are currents, river mouths, pressure cracks, and any structures that extend out from the shoreline or protrude above the ice. Obviously areas of open water should be avoided. It is not uncommon for ice to break away from the pressure cracks in large masses and begin to float away. Now we’re talking larger ice masses that may currently be inhabited by fishermen with 4 wheelers, snowmobiles, ice fishing shelters, fishing gear, and anything else they have decided to bring along. It pays to take heed that if you are trapped on an ice flow, you may be rescued but your gear stays behind. The Coast Guard only retrieves people. Heres a sample from todays newspaper:

ESCANABA – The U.S. Coast Guard rescued three men from a floating ice flow in Little Bay de Noc Monday night. Ray Segorski, 56, John Deplonty, 58, and Paul Roll, 73, all of Escanaba, were ice fishing off the Escanaba Yacht Harbor when they became stranded on a large ice flow floating away from shore, according to a release from the Delta County Sheriff’s Department.

The men, who had driven 4-wheelers onto the ice, called 911 from a cell phone at approximately 5:48 p.m. At the scene, deputies observed a large area of open water between the ice flow and the shoreline.

They were lifted to safety at approximately 7:25 p.m. and flown to Delta County Airport where they were treated and released by Rampart personnel. No injuries were reported.

The men were stranded on ice eight to 10 inches thick, said Oswald. “It broke loose in the strong winds and flowed out into the bay,” Oswald said. “The ice started busting up. When there are waves, the ice starts deteriorating.”

Officers stayed in contact with the stranded men throughout the rescue via cell phone and also worked to direct the helicopter.

I know the area very well. If, and say this with a lot of probabilities, a party of fishermen went undetected as missing while stranded on an ice flow, their next stop could be as far as Chicago. Keep in mind thats if the flow holds together through the waves of Lake Michigan. Of course thats a big probability but very poignant when trying to stress safety especially when fishing further out on the bay. 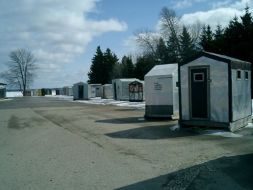 For a lot of people this is the time of year to haul in their fish shanties and move into thoughts of spring and open water perch fishing, steelhead fishing, and of course turkey hunting. In fact shortly after the walleye season closes you will find numerous fishing shanties lining the launch sites at local bait shops.

Regardless, you can still find small armies of dedicated fishermen hitting the late season hardwater. Some will be content to jig around the weedlines. Other will venture further into the deeper channels looking to target schools of jumbo perch and possibly whitefish. Others will be hopping from one hole to the next that was left behind from the fisherman before them or an area where someone has removed their shanty. All in all their tactics may differ from one individual to the next but they just cant end another season without some last chance perch fishing.

If you’re looking for some fast action with the added benefit of a great meal this could just be your ticket to breaking the doldrums of these transitional days before spring finally takes hold. This may not be your last chance to fish perch but, mother nature is certainly counting down the days left for some late season hardwater enjoyment.