After the rut a lot of hunters call it a year regardless of whether they have scored or tanked in filling their tags. In northern climates the whether can turn frigid quickly during the later parts of November and this is one reason why many hunters opt to stay at home. Couple this with a recent firearms season and it’s easy to understand why a large majority of hunters feel that the hunt is over for yet another year. But there is a lot to be said about hunting the late seasons.

Because so many hunters subscribe to the same mindset as mentioned above you can capitalize on numerous hunting areas where you will find little, if not non-existent, hunting pressures. And don’t fall into that category of hunters who believe a second rutting phase never occurs in a particular hunting area. This late season phonomenon is not reliant on the bucks visible presence because, just as earlier in the season, a buck will travel to the receptive doe.

On a late season hunt here in the Upper Peninsula of Michigan I sat in my treestand, fingers seemingly froze in position around my trigger release. My arms felt as if they would create a creaking noise if in fact I had to draw my bow. Everything is foreign in this type of situation and dealing with the weather is imperative for success. I had only been on the stand an hour and a half when the woods came alive with more deer than I had seen at one time during the previous days. It was complete chaos as a doe had obviously come into estrus and attracted several bucks into the area as her scent traveled effortlessly through the cold thin air.

The doe was being trailed in fast procession by all three bucks of whom seemed to have little concern over one another. The doe appeared panicked with no recognizable signs of relenting to the actual breeding process. As I sat and watched my field of view was a mere 30 yards in width. I would hear the deers hooves on the frozen ground most times before visually spotting each animal. At one vital point the biggest buck and the doe both stopped directly in front of my stand at 25 yards facing towards me. The steam from their muzzle and heaving of their ribs showed the obvious presence of exhaustion. I knew at one point they would have to turn broadside and decided to draw my bow. Lets check that last statement. Tried to draw my bow. It felt like I was trying to pull a locomotive train backwards with one hand. I had made that one rookie mistake in a bowhunters first years of hunting the cold weather season by packing on too many layers of thick bulky clothing. Factoring in the excitement of the moment and the frigid weather spelled certain disaster. After my third attempt to draw the bow the two smaller smaller bucks came in and the chase was on once again as all the deer scattered this time not to re-appear in my field of vision. Although that may have been over 25 years ago, I learned a valuable lesson.

Here are a few tips for cold weather hunts.

Clothing
A lot can be said about clothing and the thought that staying warm is priority. Granted, retaining body heat is essential but performing in that same clothing is detrimental to the actual process of making a deadly shot.

Too many people bulk up layers of clothing that create a camouflaged-looking Michelin Man. You may stay warm but in reality this is going to create restrictions when drawing your bow. You may inadvertently create contact points, such as the forearm or chest area, where your bowstring will drag or slap across the fabric of extra clothing. My advise would be to spend a little extra on the right type of quality clothing that will allow you to create as few layers as possible while still remaining protected from the elements. Looking at this from a monetary position, those who have purchased many moderately priced hunting garments probably could have bought a very good quality outfit that will in turn last longer through the years. Undergarments or layering material is essential for the baselayer. Wool and fleece are both terrific at trapping air and allowing your body to warm these fabrics naturally. A windproof garment or similar tightly-woven article of clothing as outerwear will trap and hold that generated heat longer. The end result of any purchase should be to buy the best that you can afford. For most hunters this is not a single year purchase as the clothing will be able to accomodate many years of field activity unless physical growth is still predominant.

Practice
A common instance of late season hunting is lack of practice with your bow. It’s not a hidden issue that equipment, and people, perform differently in fluctuating temperatures. Need an extreme example? Your brain can be reduced to that of a 6 year old, or worse, without proper equipment while attempting to conquer Mount Everest. Although this is due to mainly to oxygen levels, the cold weather also plays a part in the equation. Obviously we arent going to see those extremes but it serves as an example of a humans body reacting to different temperatures. You can shoot your bow all summer and throughout the fall but if you’re not replicating the current hunting conditions, then you have lost that edge.

Keeping in practice doesnt mean just shooting a few arrows in the yard before you leave. Set your bow, release, and arrows, outside for a half hour while you spend some time in the same temperatures. Wear the clothes you plan to hunt with but don’t wander around and create body heat. Remember, you will be sitting as still as possible while on the stand and the cold will take effect quicker. Shoot from a standing position or from a sitting position. Just try to replicate your hunting scenario as closely as possible at least once before hunting the late season since this is the time to realize possible problems before heading to the woods. It may be completely feasible that you will need to adjust your bow to a lower poundage. If you’re struggling to handle the poundage that you have shot through the rest of the year, then by all means, don’t hope for the best. Take the time, turn your poundage down, and continue practicing. Most hunters can easily remove 5 to 10 pounds of pull from their bows and still have more than effective capabilites for speed and arrow penetration. 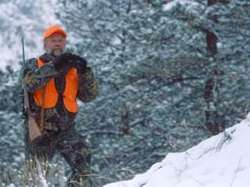 Finding The Deer
The deer have just gone through a stressful time of the year. With the rut having taken place recently and a full blown assault of firearms hunters crawling everywhere in the woods, the deer have a tendancy to be a bit skittish. They key is all that commotion and scent is quickly disappearing and the deer will realize that it’s time to start feeding at regular intervals. Food is your main objective here. Realize the food source and you will find deer.

Food sources can vary greatly. Don’t overlook some very basic requirements as such that you discard the obvious. The woods are no longer the bountiful fields of green that they were previously. Small patches of foilage, shrubs, low hanging greenery, can all be vital to the deer at this point. Look at transition zones, where forest meets fields, for the hardiest plants that have survived the frost or early accumulations of snow. The canopy that is found at these transition zones affords some protection from the harshest weather while still allowing sunlight to penetrate it’s edges. In turn the deer will tend to skirt the edges of these area seeking some of the last nutritional vegetation.

You will also want to take note of trails that lead to and from these transition area. If you are fortunate enough to have snow on the ground you will have an easy visual confirmation of whether the deer are utilizing the area for food or just for travel. Feeding areas will consist of layered tracks that many times appear one on top of the other as the deer shuffle about to forage. This is also true when the deer are taking advantage of food sources such as low-hanging cedar branches and the likes of such trees and shrubs. Evident will also be the chewed or snipped ends of branches with little, or no greenery, left behind in some cases. A simple search of the immediate area should indicate if more of the same vegetation is still available which in turn will continue to attract deer.

During the end of the season it’s common practice for deer to take advantage of the sun and it’s natural heat. Although you may not be experiencing exteme cold temperatures, keep in mind that deer are masters at conserving energy and utilizing the natural elements. A deer will burn less nutrients and energy by holding it’s temperature at a reasonable level at any time of the year but moreso during the winter or late season hunt. Check the openings and ridges that have a predominant eastern facing slope in the mornings. Glassing from a distance often can reveal deer near the top of these slopes. As the day begins to warm this provides a perfect area for deer to catch those early morning sunrays and test air currents that begin to rise up the ridge.

Once you have identified a food source try to evaluate the abundance and, if possible, the average number of deer utilizing the source. It’s not completely unheard of to find a large food source that can hold and attract deer for a week or more at one time depending on quantity and the herd size. Take notes at all times or at least process a journal at each days end. This is your personal information which will be a terrific resource for following years as a form of scouting. Keep in mind that even if you do not put a deer on the ground during the late season you have still learned more about their habits and reactions to changing weather.