Years ago I left the unforgiving circus of print media not for a lack of material or capabilities, but for the sub-standards imposed by editors who have never realized the actual experience of setting their own foot to the earth for sheer pleasure or adventure. Stifled and censored by monetized greed, it became apparent that my writing was no longer represented in each article as each line of type became a mirror reflection of corporate suits interested only in capital gains. No longer considered a simple cog in the money machine, I awarded myself a lengthy hibernation away from the majority of author venues and buried myself in reclusive research. Thus, I have awakened and find myself armed with an arsenal of verbal projectiles. It’s a Twisted Trail at times but you’re welcome to tag along.

Commercialization vs Realization
The scene starts out with the founder of a very well known producer of camouflage clothing on yet another hunting trip. The camera awaits outside the lodge as the host of todays hunting show appears in all his polished glory adorned heavily in his latest brand of camo. The camera zooms in as todays lesson begins and the host stammers through his previously written sermon regarding scent control while deer hunting. Todays sponsor is of course a major manufacturer of scent control products. Our host rambles on regarding the importance of controlling your scent and playing the wind correctly in order to bag a big whitetail buck. Tell us something we don’t know! Better yet, teach us something we don’t know!

Our host makes a feeble attempt to create his own brand of friendship with the viewing audience as he douses himself with the magical scent control product. As the sermon ends the camera pans to the left, following the host, and he straddles a 4 wheel atv and drives away to one of the scaffolds provided by the lodge guides. [Insert that screeching noise of a phonograph needle being purposely dragged across a vinyl record here.] Backup the tape please.

We just sat through this lengthy sermon in which the host projected complete conviction regarding the importance of staying scent-free while hunting. Yet, roll tape forward a bit please, there he is in all his bobble-head glory tooling off on a machine that is probably one of the worst offenders in todays hunting circles. Don’t get me wrong. Four-wheelers have their place and are great at bringing game back out of the woods but, if you are naive enough to believe that you can drive a four-wheeler to your hunting spot, and not retain that odor, you fall into the classification of the lesser, somewhat hunched over bi-pedal. Here are some facts to consider. 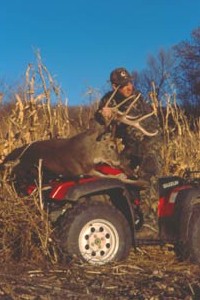 In order for you to avoid exhaust from the machine you would need to have the wind in your face for the entire ride including the moment that you stop. Not very likely. Second, there is always transfer of scent from any article or object. Seats, handlebars, foot-pegs, shifters, brakes. You are not scent-free every time you ride that machine and no amount of the magical scent control product can subdue the associated scents that are carried on such a vehicle. Spraying yourself before driving the machine is as useless as todays host.

Now, I’m sure a lot of people are saying “Well, I use a 4 wheeler all the time and I get my deer.” Good for you. I have a buddy that drives a pickup truck out into the field every day and dumps off buckets of bait. He then drives away and sneaks back to his blind. He claims the deer believe he has left and now the coast is clear. He shoots big whitetail bucks every year and I acknowledge the fact that he shoots the deer but I dont agree with the technique. Was it really that far that it couldn’t be walked like you did so many times before you owned the machine? Are you absolutely sure that the buck you shot was the biggest dominant buck in your area or did that huge monster stay hidden due to some foreign scent in the air? Face it. You don’t know and you are conceeding to the fact that it’s easier this way. Let’s fast forward the tape a bit.

Ah, here’s our host moving ever so slowly on his quad just before he stops and begins to whisper to the camera. Look, he just drove up on a 4 wheeler but it appears absolutely imperative that everything must now be silent. Obviously he’s now in stealth mode as he begins to stalk towards his treestand. But I’m on his side with this one. If he is close enough to his stand that a deer could actually hear him talking then he should whisper if he feels he needs to be talking to begin with. Besides, I’m pretty sure that the deer couldnt have heard the 4 wheeler. Not! Get the hell over it! If you have to drive your machine that damn close to your stand, and you’re not handicapped, you’re just plain lazy and the walk would probably do you some good!

The argument, no, the excuse, I hear often is the time factor. I honestly understand and support the immediate need to hunt as often as possible. But I also understand that most people would want to make their hunt as productive as possible. You don’t run to your blind once you get off the machine do you? Why not? You only have this little bit of time to hunt. You’re in a freakin’ hurry man. Get your ass in there as quickly as possible, plop down, and catch your breath! You see the scenario here? I would much rather have the opportunity to hunt 45 minutes of quality time than 1 hour in which the approach was nothing short of reckless.

A lot of people claim they condition the deer to the sound of the four-wheeler. I never hear them claim they condition the deer to the odor. But I’ll fall onto the side in which deer can be conditioned to many instances and that may include the sound of a four-wheeler approaching. A deer can become accustomed to many sounds and, if it hasn’t reasoned that the noise represents a cause for alarm, this just might work for you. Notice, I generalize the statement with the word deer. Tell me that you’re trying to condition mature bucks to the sound of you’re four-wheeler and I’ll ask why. I’ll probably even plunk the word idiot or maybe an oldie like idgit in there somewhere. Would you even think about driving that machine to your hunting spot if you knew a world class buck were in the area? Would you? But you’re pretty sure that a buck of that magnitude simply doesnt reside in your neck of the woods so, it’s alright. Right?

Let’s jump back and see how our host is doing.

The camera pans across the terrain in an over-the-shoulder shot from behind the host. The images show numerous trails coming together in a spoked pattern which alone is enough to get your heart racing. At that moment the dubbed music begins to play and the hosts whispers become inaudible over the poorly developed editing job that took place months after the hunt. The buck walks into the arena and pauses behind some brush seemingly closing the deal for the host just as he was about to draw his bow. The music fades into the background as time stands still and the camera zooms in where the arrow is unable to penetrate. In the heat of the moment the buck moves forward and the music begins to roll in unison with every movement of the deer as he approaches the shooting lane. In a slow motion recapture, the arrow flies and strikes the target true before panning down to our host who is now clenching his fist with his thumb in the air trying to speak through wavered breathing patterns. The final scene fades as the host once again exclaims the importance of concealing your scent on every hunt while he counts antler tines.

This is where the realization becomes muddied with the commercialization. In reality, the hosts sequence of events were completely inadequate and sent a message to the novice hunter that using scent control products is a cureall for many applications. The approach to the hunting area lacked the realism and basic respect for the knowledge of the viewing audience. The complete production was based on supporting those who support them and that, in this case, were the sponsors. Although I understand the obligations for paid sponsorship, I realize that the main objective is the production that connects to the viewer on a personal level by relaying the knowledge that actually works rather than mis-leads.

I invite you to leave the corporate and commercialized world behind on your next hunting trip. Walk to your blind and treat every step as part of the hunt. You may be pleasantly surprised and justly rewarded or, you might just find that the trail is a bit more twisted than you once remembered.