My old buddy, Bubba, and I had arrived at our fishing site very late the night before. I remember the trip to the campsite well because most of the floorboard of his truck was rusted out so I had to ride with my feet on the dash. Once we got there, we put the tents up and went straight to bed.

Both Bubba and I are military vets so I’ve never had to worry when camping with him. We both spent years in the service and camping out was not a big deal. We didn’t really need much to get by on and we had a lot more gear with us than Uncle Sam ever issued for us in the woods. The way I figure it, a big tough vet should be able to take care of himself in the woods.

Morning dawned chilly, windy, and with a threat of rain. Dark black clouds were moving overhead as I started the fire. Our morning coffee was brewing in a matter of minutes of my waking up. I always started the fire in the mornings because Bubba was a complete idiot when it came to fire craft. His idea of starting a fire was a gallon of charcoal lighter fluid and a box of blazing matches. So, once his eyebrows and hair grew back, I just took over the task.

“Hey, Bubba! You going to sleep all day in there?” I yelled at the man as I filled my coffee cup.
“I jess might, why?” Came a groaning response.
“I thought you wanted to fish! Come on, Bubba, let’s go fishing!”
“Ok, let me dress.” Came a weak reply from the tent.

Bubba exited the tent five minutes later, but as he started to walk toward the campfire he suddenly stopped. I then noticed him slowly backing up, with his left hand behind his back. Now, I am not the brightest lure in the tackle box, but I knew right off he was hiding something from me. And, that fact made me determined to find out what it was.

“Hey, Bubba, what are you hiding behind your back?” I asked with a crooked smile.
“Nothin’, nothin’ at all.” While he spoke clearly enough, he did not make eye contact. 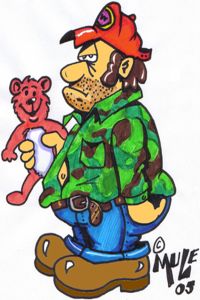 Quickly jumping up, I chased Bubba around and around his tent until he finally dropped what he had been hiding. Now, this is hard to believe, but it was a bright pink teddy bear! As soon as I saw the bear, I started chasing him once more and we soon knocked his weak standing tent over.

“Bubba, I don’t believe this!” I said between gasps for air as I laughed.
“Shut up, Gary!” Bubba had assumed a very threatening stance and looked very angry.

“Are you sleeping with a teddy bear? Bubba, I never knew you had a bedmate. Does Maude know you got a girlfriend?” I said all of this in the same voice kids use in school, when they tease a kid. Y’all can remember those days and how varying the voice tone is.

“You keep Maude outta this! You know my wife hain’t got nothin’ to do with all of this. You quit a-teasin’ me too, a-fore a get mad at ya!” As Bubba screamed, I was fascinated that a small piece of chicken from last nights dinner was still stuck between his two front upper teeth.

“Ok, Bubba, I’ll quit. But, Pinky there is not going on our fishin’ trip this mornin’. Besides that I ain’t got but two life vests although I suspect she would float a bit!” I just could not let this issue go, it was too good.

At that exact moment a bright flash of lightening filled the air, quickly followed by the loud report of thunder. Raindrops began to fall, slowly at first then picking up the tempo. Bubba and I ran to the nearest standing tent, which was mine. Once we got inside, I zipped the door and the windows closed. It appeared we would be there for a while.

I looked over at Bubba and noticed him looking at me like a nervous virgin bride on her wedding night. He was all cowed up in the far corner of the tent. It was then I noticed he was wearing his long underwear, boots, and ball cap. I hadn’t noticed it before because of the excitement of the chase. It took all I had to suppress a laugh because he had his “Pinky” in his right hand on his lap. I just shook my head and leaned back on my sleeping bag.

“How long is it a-gonna rain?” Bubba asked me, just like a six-year-old boy on his first experience with rain and camping.

“Well, from what I saw, I would suspect until it quits, Bubba.” I replied in my most serious voice.
“That’s stoo-pit, Gary. I know that.”
“Then, why did you ask Bubba?”
“Oh neveh mind, I was just a-making a conversation” Bubba quickly spurted out and then turned to pouting.

The next hour went by slowly with the tent rocking from the wind and the spattering of raindrops. Thunder crashed and lightning flashed across the sky. I realized then that we were in for a long wait for this storm to pass. I looked over at Bubba and he had fallen asleep. Yep, the man was asleep and he was cuddling his pink teddy bear close to his heart. This, my friends, was just to good of a chance to pass on.

I reached down to my backpack and removed my camera. I took my time making sure Bubba was centered and the flash would work. I snapped three photos of him and “Pinky” before he moved a little. I then quickly put the camera back and took a nap myself.

The rain continued all that day and most of the next. Finally, about noon the next day we packed up and went home. Bubba, I’m sure, went back to bed, while I went to a one-hour photo-processing store. I had 10, 8×10 photos made of Bubba and his bear. I had some serious plans for these pictures.

The next afternoon I was sitting in my Uncle Andy’s café when Bubba entered. He was madder than a wet hen sitting on an electric fence. He marched right up to my table and loudly asked, “Why in Sam’s Hill did you do this to me? I’m supposed to be yer cousin and your best buddy. How could you do this”?

Well, I had to play ignorant or it just wouldn’t be any fun at all. I looked up at Bubba, took a nice slow sip of my hot coffee, lowered the cup and said, “Bubba, you been in the beer already? What are you a-talkin’ ‘bout?”

Bubba looked totally confused and lost. I knew he was confused because he took his ball cap off and started scratchin’ his almost bald head. As I watched him scratch his head I realized he had lost more hair since the last time I had confused him. After about five wordless minutes he said, “You mean you didn’t have nothin’ to do with all them pic-shures ‘showing up round town of me sleepin’ in yer tent, a-holdin’ my teddy?”

Bubba leaned way over my table until his nose almost touched mine and said, “You did so! You are the onliest one that could have taken a pic-shure of me like that! Why, it’s down right ‘timidatin’ it is!”

Looking as serious as I could, which believe me was not easy, I said, “Bubba, do you mean these pictures?” and held up a stack of 8×10 photos
.
“Yea, them pic-shures right there! They be posted all over town!”
I quickly placed the pictures on the chair next to mine, gave Bubba a big toothy grin and said, “I hain’t got no idea what yer a-talkin’ ‘bout. What pictures?”

That was pretty much the end of the “Pinky” goes camping episode. I laughed so hard I cried as Bubba turned and walked out of the café talkin’ about all of my ancestors.

It’s been over five years since this happened and at times when Bubba gets a little too big fer his britches, I know how to take the boy down a notch or three. I simply send him an email, with a photo attached.