Fitter
Tiger shark too tardy to get teeth in tourney 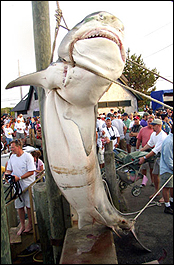 The picture says it all.

“This shark could eat you!” said Steven James, president of the Boston Big Game Fishing Club, which staged this weekend’s monster shark derby on Martha’s Vineyard.

Despite its monstrous proportions – 1,191 pounds – this toothsome tiger shark did not win the competition, however, because the captain was six minutes too late into the Oak Bluffs harbor.

“This is an unbelievable monster shark . . . it’s truly a dinosaur,” said James, who had to break the news to the captain, Damon Sacco, out of Sandwich, that his entry missed the deadline.

Will
Who’s eating who? Load up a pallet of charcoal and lets party.

Fitter
Hell of a fish isnt it? The picture itself looks strange to me but then again I havent seen to many sharks strung up like that.

Wouldnt mind battling a monster like that but sure wouldnt want to be in the water with it!

Will
Rather not see that shark swimming straight at me. It looks funny because sharks have no bones. Only a cartilage frame supports them. Even their teeth are nothing more than modified cartilage. Hard, Sharp, Hungry cartilage.