As I was running outside and the door slammed shut, the last words I heard my Aunt Myree say to me were, ”Jon Howard, you be careful and don’t play with that dog!” “That dog” in question was a Terrier mix and My Aunt and Uncle, Myree and A.C. Turner, had put it on a leash attached to a clothesline in their backyard because it had been acting “funny”. Their backyard was in Huntsville, Texas, one block off of old Highway 75 and my Mom, Dad and I had gone up to spend a weekend with them and their two, young sons, Bill and Roy Peyton, known then as “Bubba”.

Once outside, being five years old, the first thing I did was go right up to the dog and try to play with it and it responded, not very playfully, by jumping up on my chest and biting me! Inside I ran bleeding and crying, not caring about all of the “we told you so’s” heaped on me.

The “biting” event occurred on a Saturday morning and the first thing Monday the dog was euthanized and my Uncle took its head to Austin, and sure enough, the dog was rabid. My family got the results on Thursday and Friday morning found me and my Mom and Dad in Dr. Talley’s offices, in the old Medical Arts Building, in downtown Houston, for the first of fourteen rabies shots, spaced around my navel, timed every other day. It was the biggest needle I had ever seen, and thinking back, it must have had one or two ounces of an unpleasant looking, green serum.

The shots saved my life, but by the third morning, I resisted the shot so bad, that before it could be administered, it took four adults to hold me down. This went on for the next eleven shots and scarred me forever. I now have a terrible case of “white fright” whenever I go into a doctor’s office. My blood pressure goes up twenty to thirty points and my heart rate up twenty beats or more per minute. I have fainted getting a shot in my arm.

I was laughing about this, my “white fright” and my rabies shots, one day while talking to Mickey Donahoo, a senior softball playing buddy of mine who retired, with his wife Doris, to the Goldthwaite, Texas area shortly after I did, and he casually mentioned, “You know, Jon, I have had rabies shots too,” and then began one of the most bizarre hunting stories I have ever heard!

Mickey and Doris, were spring Turkey hunting on their lease outside of Ozona, Texas, crouched down in a “hide” trying to lure a tom Turkey into range. Mickey had a shotgun and Doris her trusty .243. Mickey had been calling, soft clucks imitating a hen, with no success and they decided to move along a nearby game trail and make a new “hide”. 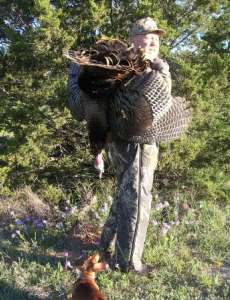 Walking down the game trail, hearing noise in the brush, Mickey and Doris, were shocked to see a Bobcat running down the trail toward them. Bobcats are shy, mostly nocturnal animals, but this one kept coming and was soon almost on Mickey and as the Cat closed on him, Mickey kicked it as hard as he could, under its chin, knocking it up in the air. Then the Cat surprised them both, while up in the air, before it hit the ground, it spun around and viciously attacked Mickey!

I own a big, house cat and some times he will try to grab me around the knee and wrap his paws around my leg, playing of course, but this Bobcat meant business, attacking Mickey’s knee area, wrapping its paws around, and planting its razor sharp claws, firmly into Mickey’s leg and began biting at his knee. When going for a kill on large game, Cats will, almost always, try to disable a leg joint, slowing the animal down, before the kill. Someone famous once said, “If you want to study Lions, but think it may be too dangerous, study small cats first. Cats are Cats.”

Trying to grab the Cat’s throat, Mickey drops his shotgun. Afraid of hitting Mickey, Doris can’t shoot the Cat with her rifle nor can she club it for the same reason. Her next choice is taking off her ball cap and whacking the Cat with it. This whacking and Mickey’s continued pressure on the Bobcat’s throat forced it to let go and retreat into the brush. Mickey and Doris had dropped their guns during the melee and couldn’t retrieve them in time to get off a shot.

Through his shredded pants, along with the blood, he could see, and feel, numerous puncture wounds and they both knew that he needed medical attention quick, the closest being a clinic in Ozona. Driving to the clinic and recounting the attack, they thought it strange that the Bobcat smelled like a skunk and that it had no fear of them. Rabid animals have no fear of humans!

At the clinic Mickey’s wounds were cleaned and bandaged and the Nurse told both of them, “Based on your all’s story, the Bobcat was probably rabid and you can’t take a chance, and should start rabies treatments within seventy-two hours!”

Today, treatment for rabies consists of five shots into a muscle, which he had, just like a normal shot, but in his case, to prevent infection and assist healing, each of his, over one hundred, puncture wounds had to be injected with Gamma Globulin, a thick liquid that doesn’t “spread out” like a normal injection and is painful when injected and remains so for hours. I hate all shots, but having had one Gamma Globulin shot myself, I can only imagine what over one hundred would feel like.

Mickey and Doris have hunted big, dangerous game for years, having made eight trips to Africa after Lion, Cape Buffalo and Elephant, but the encounter with the Bobcat, and the following rabies treatment are etched forever in their memories.

Do you think Mickey has “white fright” now?