All day long I had been trying to get a hold of my Son, Randy, to help me with a sticky problem on my Blog. Finally, in the evening he called me, very frustrated. He had “snuck” off and gone fishing, a noble achievement, and as we say, “I resemble that remark.”

He was frustrated because he had lost several nice Bass, because he had made a mistake of epic proportions. He forgot to put the hook on the new H and H Spinner Bait he had just bought at a large sporting goods store. This particular product comes from the manufacturer in a plastic bag and the fisherman must add the hook to the spinner bait before using it. In Randy’s excitement and impatience to get to the fishing at hand, he had neglected to attach the hook.

As I laughed at his omission, my thoughts went back, years ago to a hastily planned fishing trip that I went on with my Uncle Gus, George Alvin Pyland. He like my Dad was from Marlin, Texas. That particular summer I was working on another of my Uncle’s, Shelton Gafford’s, ranch outside of Marlin. My chores were finished early and I went into town to make a purchase at the local sporting goods store, which happened to be owned by Sam Pyland, uncle Gus’ brother.

When I walked into the store, surprise, there was Uncle Gus talking with his brother. We hugged and shook hands and exchanged some small talk, and one of our favorite subjects, fishing, came up. Mentioning that Uncle Shelton had gotten me permission to fish in a stock tank, unfished by its owner, and planted with Bass by the state five years ago. And that I was on my way out there as soon as I picked me up a couple of yellow Piggy Boats, Uncle Gus volunteered to go with me. He was in town for a short visit and would be happy to “help” me thin out the Bass in this tank. 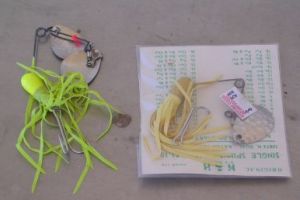 I don’t know who made Piggy Boats Spinner Baits, I guess the Piggy Boat Company, but I do know that the company that made Piggy Boats was sold to H and H, the current manufacturer and H and H now has been sold to a large retailer. But, whoever the owner, this particular Spinner Bait remains one of the best baits for stock tank, small lake and stream fishing for bass. In saltwater I have even caught Red Fish and Speckled trout with them. Then, like now, they were sold in a small plastic bag with the hook not attached.

Uncle Gus had no tackle, but I had an extra rod and reel with me, so telling his brother goodbye, he purchased two Piggy Boats with yellow skirts and we headed out to catch some Bass. Arriving at the stock tank which was in the middle of a one hundred acre field covered with Red Buffalo Grass, I got out of my truck, walked to the edge of the water and made a cast and was into a nice Bass immediately. Uncle Gus said, “Wait for me Jon Howard” as he hurriedly attached the Piggy Boat to his line.

Uncle Gus looped a cast along the bank near us and had a strike that almost jerked the rod from his hands, the Bass ran toward the center of the tank, jumped, mouth open and the Piggy Boat came flying back towards us. Uncle Gus was a salt water fisherman of great skill and perseverance, but muttered, “Dang, that’s funny, the hook didn’t get set good even with that hard strike.” as he prepared for another cast.

Another cast, another jolting strike, another lost fish caused him to mutter, “Jon Howard, these Bass are harder to hook than Specs.” He was a great Uncle to me, and a good Christian man, but when he lost his third Bass I was afraid my rod and reel were going into the water. Before that happened I asked him, “Why don’t you bring your rig over and let me check the hooks?” “What hooks?” he replied. I tried hard not to laugh, but in his haste and excitement he had forgotten to attach the hooks to his spinner bait.

Slipping the hooks on his lure, he cast out and, whamo, another hard hit, but this one was hooked good and soon landed and put on a stringer. We both got to the business of catching Bass, along with a couple of Goggle Eye Pearch, and ended up with a nice mess of fish.

The story ended well, but after Randy’s “hook” problem, it got me to thinking. You know, both Randy and Uncle Gus are former students at Texas A & M!