The Whip is a Deflex Reflex Longbow that has a very slim profile and a small grip. Both bows have the standard Thumb rest and a locator type grip that places your hand in the same position every time you pick up the bow. The limb tips are very well done and reinforced to use any of today’s modern strings. They are a well-reinforced fine tip that has great eye appeal. 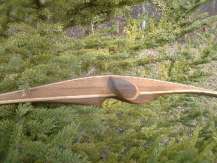 The Whip Bows are made with natural woods, laid up by hand. Dan does not use Dymondwood or actionwood in his bows. You have to settle for the real thing. The workmanship is flawless. Each bow is finished with eight coats of 2-part Urethane in a satin finish; there is no reflection at all from either of the bows.

The satin non-reflective finish is flawless, just like the workmanship in the rest of the bow.

The first time you pick up a Whip you notice how light and well balanced it is and how nicely it seats into your hand. There is no trying to find the right grip, it just happens. The Whip is quiet, deathly quiet in fact. With “quiet” in any bow comes the dead in the hand feeling and these bows have it. There is no feeling to the shot, the arrow streaks away and the bow sits there. No noise, no buzz, no shock, it just sits in your hand. This is shooting quality at its best.

The first bow to arrive was to be reviewed by Shannon Kuzik, my testing partner because I was committed to a full load of reviews. This is the 58″, 51# @27″ whip. I was going to shoot it for a couple days just to get a feel for it and turn it over to Shannon who would take it for the summer, work up a review and try to harvest an animal with it this fall for an update to the review if he liked the bow. This plan fell apart rather quickly after I shot the whip. I took it to the range and had a few friends test shoot it and held onto it for a bit longer than planned before giving it to Shannon for his review. I just hated to let it go, and I was planning to borrow it back from Shannon to take to the shoots I go to. I always have demonstrator bows with me for people to test shoot and the Whip needed to be shot and passed around at the target butts.

When I told Dan about how much I was impressed he decided to send another bow to be taken to the events. This time we decided to pick a longer model in a lightweight that everyone could shoot. The 58″ 51#, @ 27″ bow is a bit too much draw for the ladies and young shooters, and the short bow is not Ideal for those 30″ draw shooters. It is intended for shooters with a draw of 28″ or less. The second bow we decided on is 62”, 45# at 28″. This one can be shot by anyone, and every shooter will be able to feel for themselves just how sweet it shoots regardless of their draw length.

In about 3 weeks the second bow arrived and like the first one it is also flawless. I was impressed with the short 58″ model and then after shooting the longer 62″ bow I was sold on it. That extra limb length and light draw weight makes for one sweet shooting experience. I liked it enough that I shot it in the first 3D shoot of the season after having it for only a couple days and placed second with it. I also shot one of my best rounds ever with the Whip. It is just too easy to like these bows. Finding arrows to match these bows was easy and the setup took very little time. Forgiving is a term often debated, however I consider the whips to be forgiving. Even when I release an arrow I know I shouldn’t have, it seems to find its way to the target with reasonable accuracy. The 3D 8 rings seem to be very easy to find with these bows, even on days that my mind seems to be elsewhere. This is what I call forgiving. 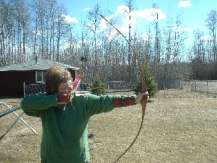 Frequently when I pass around a new bow to be test shot the shooters shoot a few arrows and move on to the next bow. I am finding that a lot of the guys testing the whips come back to them over and over. They seem to be a bow that the more you shoot them the more you like them. First impressions are good, and they get better every time someone comes back to shoot them some more.

Last week at 3D shoot a friend and the 3D director had his bow delaminate after the first round. This is his only trad bow, and he was in a bind. John had tested several bows at a previous shoot and I offered him any of the 7 bows I had with me to finish the shoot with. The 45# whip was his choice and is with John in Calgary now getting ready to be shot in this weekend’s 3D shoot. I hope it will not be to difficult to get it back from him this weekend after the shoot is over. I also hope that lending him the Whip to shoot against me doesn’t let him beat me. I do have reason to be concerned now that he has the “Whip”.

The shoot John was to use the Whip at has come and gone. I had taken the 51# whip that Shanon has with me also to this shoot so that it would get some exposure too.

On Sunday John used the shorter and heavier, 58″ 51 # @ 27″, whip and I am sure he is having difficulty deciding which one he prefers. His scores went up when he shot with the 51# Whip. I would not be surprised to see John with a new Whip of his own in the near future shooting the Whips over the past few months I have developed a real fondness for them.

They are very lightweight, deathly quiet and easy to shoot well. I do a lot of walking when I hunt and the lightweight will be a nice thing after a few miles on a hot day in hill country.

They have good performance and seem to shoot heavy hunting weight arrows very well. I cannot find any issues that need to be addressed with the workmanship or design of the Whips. Dan and Jared have been excellent to work with and the delivery time on the bows is very fast. If I were to ask for any changes in the bow as received it would only be the string.

An endless loop string just does not have the nice look that a Flemish-twist string does. Some say endless loop strings are better, but I disagree. To me they take away from the fine workmanship in the Montana Bows. I put a 10 strand DF 97 padded loop, Flemish twist from Rod Jenkins with 2 beaver ball silencers on the 45# Whip to see how it would perform. Shooting the 450gr arrow drawn to 28″, 9.5GR/#, it chronographed at 176 FPS and no gain in noise or feel with Rods string. This is a 6 FPS gain, which is not a lot, however on a light draw weight bow to be used for hunting every bit is help. On this bow it is like gaining almost an inch of draw length. I recommend changing the string to one like I used.

There are no other changes that I would recommend in the whip bows. They are just fine the way they are. Dan has done a very good job designing and building these Whips. They both will be used this fall in hunting season and with luck we will have some success photos to add in here with an update to the review.

It is easy to recommend the Montana Whip longbows to my readers. These are very well crafted and designed longbows that shoot extremely well. Dead in the hand and silent are the best features in these bows.